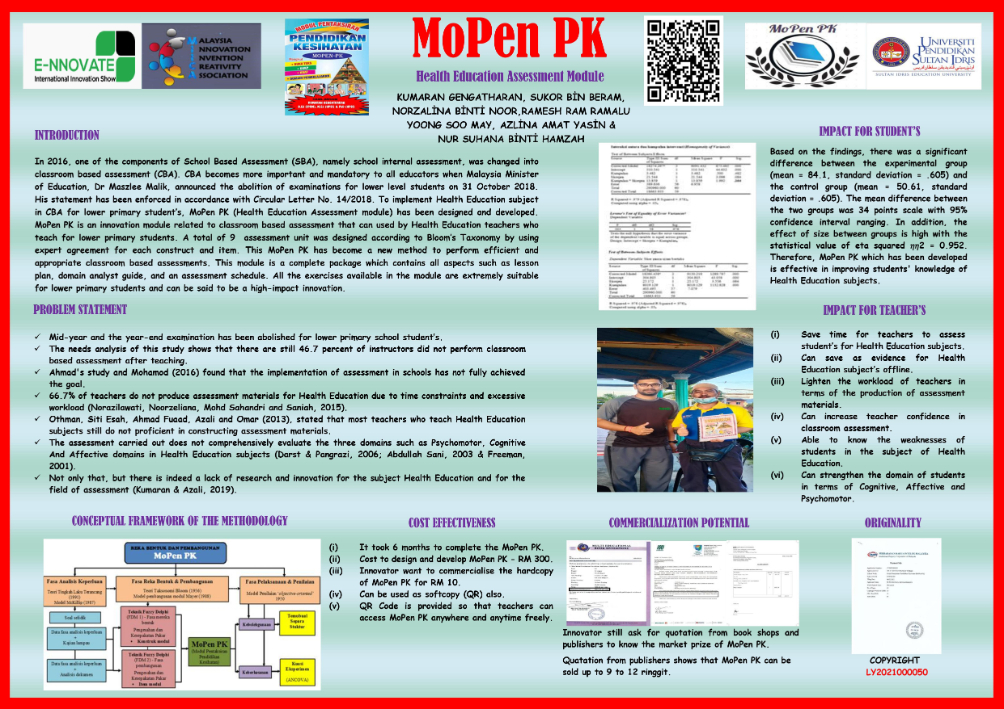 Health Education assessment module is known as MoPen PK. MoPen PK is more focused on classroom assessment. MoPen PK focuses on elective subjects namely Health Education which is always not given attention by the teachers and parents. MoPen PK is developed using three phases namely the needs analysis phase, the design & development phase and the implementation & evaluation phase. The needs analysis phase was conducted using Health Education teachers of 298 teachers and it was found that 98 percent of teachers agreed with the development requirements of MoPen PK. In the design phase 20 experts from various fields have participated in their construction and MoPen PK items. The constructs and items contained in the module have been agreed upon by experts. The expert agreement was analyzed using the Fuzzy Delphi technique while in the development phase of MoPen PK was developed by using the model Mayer 1988 which contains 13 module development steps. During the implementation phase of MoPen PK, it was used by a Health Education specialist teacher for eight weeks on 60 lower primary students who studying at a goverment primary school. The evaluation of the module was carried out using a semi-structured interview to evaluate the usability and quasi-experiment to evaluate the effectiveness of the module. The module operator has agreed that MoPen PK is suitable and efficient in assessing students' knowledge on Health Education subject. While running tests (pre and post-tests) that have been analyzed using ANCOVA show that there are significant differences between experimental groups (mean = 84.1, standard deviation = .605) with the control group (mean = 50.61, standard deviation = .605). The mean difference between the two groups was 34 points scale with a 95% confidence interval ranging. In addition, the effect of size between groups is high with the statistical value of eta squared ??2 = 0.952. Therefore, MoPen PK that has been developed is effective in improving students' knowledge and can help teachers in classroom assessment. For flexible usage, researchers have generated MoPen PK as a QR Code so that teachers and parents can use it anywhere and anytime.